Trump’s “Withdrawal” — What Next?

Militarist hawks and liberal pundits alike are up in arms (figuratively speaking, of course) over Donald Trump’s “victory” proclamation and announcement of U.S. troops’ withdrawal from Syria. Howls of Republican outrage may signal a further deterioration of the big twit’s shrinking political support on the home front. The Trump gang’s crisis of legitimacy deepens by the day. But what does it actually mean for the cascading disasters in the Middle East?

The main point to understand is that imperialism creates problems that it cannot solve. The horrific so-called Islamic State (ISIS), which arose out of the catastrophic U.S. invasion of Iraq, has not been wiped out as Trump boasted. After being defeated in the Iraqi city of Mosul that ISIS had seized and occupied, captured ISIS fighters – real or alleged – and often their family members have been brutalized, tortured and executed, leaving behind relatives and clans bent on revenge. The next round in that cycle of violence and vengeance is all but inevitable.

In Syria, it’s entirely true that a couple thousand U.S. troops can’t resolve the civil war and destruction of that country, and that U.S imperialism has no legitimate business intervening there or anywhere else. This doesn’t mean that Trump’s plan to withdraw this force has any progressive significance, or anything to do with peace. It is not a step back from intervention, but a rather small move on a regional chess board — with no regard for human consequences.

If Trump’s announcement has any coherent significance, it appears to be a gesture to Turkey’s presidentialist-dictator Recep Tayyip Erdogan, and a cynical betrayal of the Syrian Kurdish forces who have been the most effective anti-ISIS fighters. In fact, it was those Kurdish fighters who saved the Yazidi population from ISIS genocide on Sinjar mountain, liberated hundreds of Yazidi women from sexual enslavement, and defended the town of Kobane against the ISIS siege. But Erdogan’s number one priority is crushing Kurdish national aspirations, along with all democratic opposition to his rule. The presence of U.S. troops in northeastern Syria restrains Turkey from launching a murderous assault on the Kurds there. 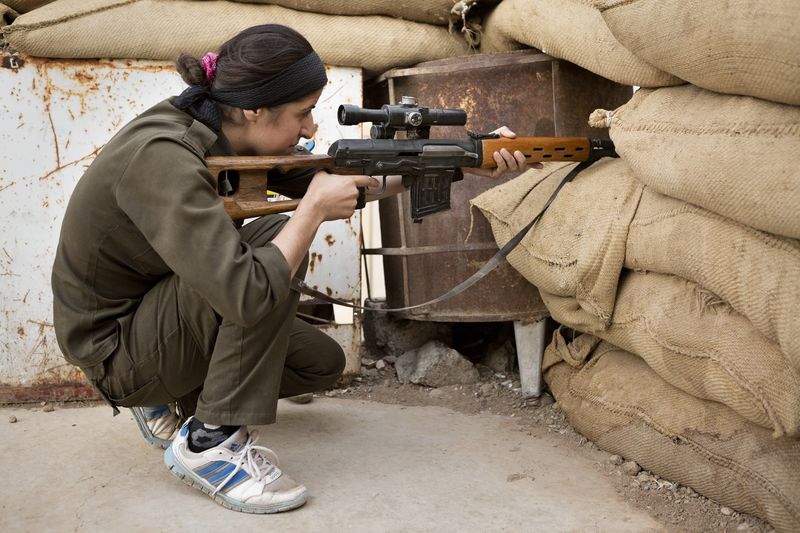 Kurdish women fighters helped defeat ISIS forces in the 2014 battle of Kobani. Now they may have to help fight Turkish forces. (Matt Cetti-Roberts/ZUMAPRESS.com)

We’re learning how Michael Flynn on Trump’s transition team was conniving to arrange the extradition of Fethullah Gulen, a former Erdogan ally now living in Pennsylvania, whose return to Turkey is one of Erdogan’s demands. To Trump’s regret extradition can’t be done by presidential decree without legal procedures in U.S. courts, but removing U.S. troops and leaving the Kurdish fighters exposed is within his “commander in chief” prerogatives. That’s a move “toward restoring Washington’s frayed relations with our strategic ally Turkey,” as the suited diplomatic thugs would put it.

The imperial knife in the back of the Kurds and their desire for autonomy or independence is a recurring story. Some things never change. At the same time, the regional Middle East crisis deteriorates. Saudi Arabia’s murderous U.S.-coddled royal house is driving Yemen to genocidal famine. Israeli and U.S. threats against Iran are provoking Tehran’s buildup of its asymmetric deterrent, the supply of sophisticated guidance missiles to Hezbollah near the Lebanon-Israel border – posing the real threat of war breaking out that neither side actually wants.

The United States has had a great deal to do with creating the disasters afflicting people from Afghanistan to Palestine. The political uproar over whether a suddenly announced troop withdrawal from a corner of Syria is or is not “in our fundamental strategic interests” doesn’t even touch the reality that it’s precisely those “interests” that are the problem.